After creating your first object you will see something similar to this on the left part of the workspace: 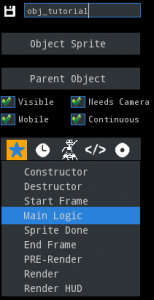 So Let's digest what is all of this craziness.

In the text-field of course is the object's name. It is the name used for referencing it through the engine and the many function to connect with it's class and descendants.

This is the default sprite for the object used for the scene editor as well as it's default appearance in the game.

This is the object in which this object inherits the properties of another user-defined object. This includes all of the user-generated functions and variables.  This is possibly the most powerful dropdown menu ever made in the GPE IDE( like seriously tho).

-Enabled by default to make the object visible in the scene and render.

-Enabled by default to make the object's logic and render calls(except for prelogic) be applied if it is within the view of at least one of the eight game cameras.

-Enabled by default to make the object utilize the GPE's default physics system.

-Disabled by default to make survive after the game scene has been changed(Usually the player object is set to be continuous).